One year after the global call to action “Drive for Five” to meet the unfulfilled promise of education for girls”, UN Women, France and Ireland co-hosted two global dialogues entitled “Evidence and experience: Adolescent Girls’ Education in the Generation Equality Forum”. The dialogues took place on February 11th and 16th in partnership with the Global Partnership for Education, Malala Fund, Plan International France and UNESCO.

Over the course of these two dialogues moderated by Jane Dorothy Anika and Zahra Al Hilaly, members of the Generation Equality Youth Task Force, over 600 policy practitioners and young activists from 65 countries gathered to highlight the role of education as a catalyst for gender equality and a cross-cutting strategy to achieve the goals of the Generation Equality Action Coalitions.

Ambassador Geraldine Byrne Nason, Permanent Representative of Ireland to the United Nations, and Ambassador Delphine O, Secretary-General of the Generation Equality Forum, opened the dialogues by highlighting the impacts of COVID-19 on adolescent girls’ education and calling for a renewed focus on education while we build back from the pandemic.

“For every single girl affected, this is a tragedy. For the world at large, it is a grave risk and a heavy blow to our progress towards sustainable development and gender equality” - Ambassador Geraldine Byrne Nason, Permanent Representative of Ireland to the United Nations. 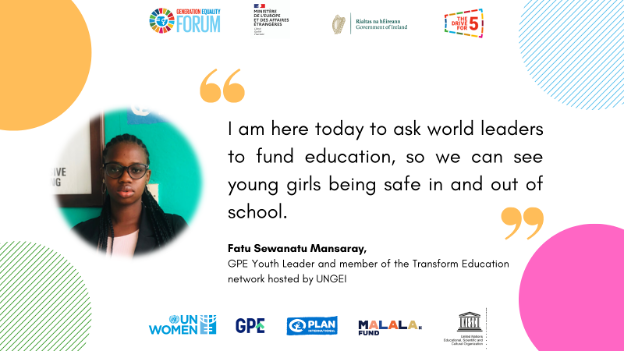 Members of the six Action Coalition leadership structures shared how education has been integrated in the six Action Coalitions thus far. Young activists Chanceline Mevowanou, Adriana Uex, Selin Özünaldım, Racha Haffar, Fatu Sewanatu Mansaray and Joanita Babirye shared their recommendations to the Action Coalitions. They emphasized the need to fund safe spaces where girls can get education in and out of school, learn about their rights and recognize inequalities. They emphasized the need for more role models and leadership of adolescent girls at all stages of education policy-making. They also highlighted the need for engagement with community leaders, and to design policies and educational environments that are tailored to all cultural contexts, and that in particular promote indigenous girls’ rights. 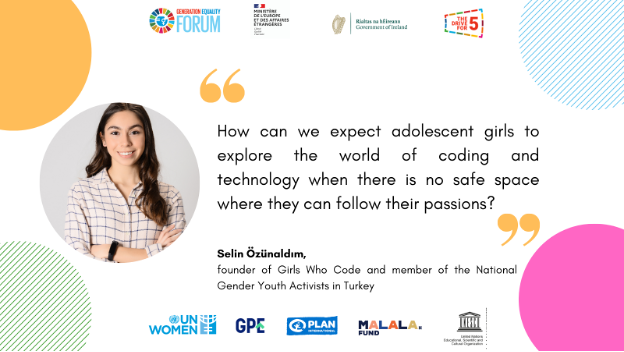 Concluding the global dialogues, Alice Albright, CEO of the Global Partnership for Education, called for a “monumental push at-scale, fostered by an unprecedented show of global will, to make sure this generation of girls and boys are placed on a path towards equality.”

The recommendations from young activists and experts will be captured in a youth communique for adolescent girls’ education. They will be communicated to all Action Coalition leaders. Nadine Gasman, President of the National Women’s Institute (Mexico), called for these recommendations to be presented at the kick-off of the Generation Equality Forum in Mexico City (March 29th – 31st).