Ahead of the Generation Equality Forum, New Multi-Country Data Finds Majority of Citizens Call for Bolder Commitments for Gender Equality

As world leaders & activists prepare for the 2021 Generation Equality Forum, a critical convening for gender equality investment and implementation, Women Deliver and Focus 2030 launched a new public opinion survey showing that the global public overwhelmingly supports gender equality, and a resounding majority is ready for their governments to take action.

The report entitled "Citizens Call for a Gender-Equal World: A Roadmap for Action" by Women Deliver and Focus 2030 is the first-of-its-kind international survey spanning 17-countries across 6 continents to capture perceptions related to the six Generation Equality Action Coalitions. The study is designed to broaden public participation efforts to achieve gender equality and equip governments, the private sector, civil society organizations, advocates, youth and the media with data on public attitudes and perceptions to prioritize action to advance gender equality and inform bigger and bolder commitments at the Generation Equality Forum.

The survey's findings include that 80% of respondents personally believe that gender equality is important, 65% want their government to invest more to promote gender equality, 82% believe women should be involved in all aspects of COVID-19 response and recovery efforts.

During the launch that took place on Thursday 28 January, UN Women’s Executive Director, Phumzile Mlambo-Ngcuka, welcomed the survey’s findings in her opening remarks and noted that “the actions we are taking in Generation Equality provide us with a once in a decade opportunity, at a critical and challenging time, to accelerate attainment of women rights. It is an opportunity that we cannot delay or minimize.”

Today, I joined @WomenDeliver and @_Focus2030 for the launch of new public opinion data on gender equality.

We call on Governments, civil society and young people to step up, to make #GenerationEquality a reality. This will be the decade for action. pic.twitter.com/MXfgBx7ANU

The survey also reveals that the global public favours strong government action on all six Generation Equality Forum Action Coalitions. Dr. Nadine Gasman, President of the National Institute of Women in Mexico, noted how these insights are crucial to shaping public policies, emphasizing that “the results of this survey have real relevance not just at the international level but also within our countries.” She added that Mexico, as a leader of the Action Coalition on Economic Justice and Rights, recognizes that “if we want to change our economy and social structure, as we are determined to do, investments have to be made.”

Ambassador Delphine O, French Ambassador and Secretary General of the Generation Equality Forum, has also stated the relevance of the findings for France as a leader of the Action Coalition on Bodily Autonomy and Sexual and Reproductive Health and Rights. “It is extremely useful to understand how our work is grounded in real life preoccupations and to orientate us and give guidelines on where we want to be going with the Generation Equality Forum.” 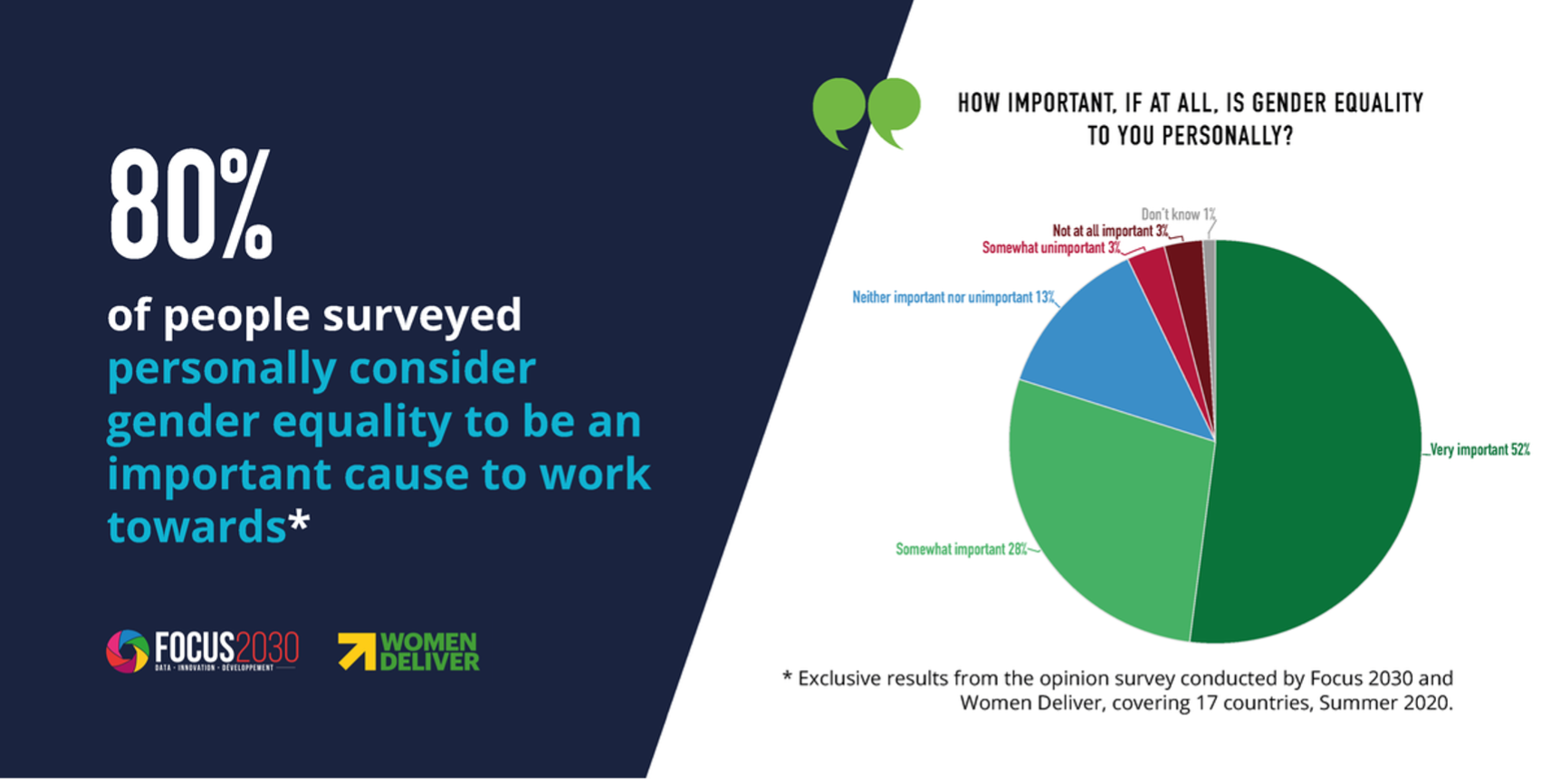 The message projected throughout the survey findings, the report and the launch event is clear: the public, and especially young people, are paying attention to gender equality and they want more action instead of more talk. “The excuse of the world not being ready to act on gender equality cannot be used anymore. It is obvious from this survey that not only is the world ready, but it is also demanding that we act on gender equality.” said Hanna Kristjánsdóttir, Senior Advisor on Women’s Leadership at UN Women, in her closing remarks.

Read the full report and country data sheets from Focus 2030 and Women Deliver “citizens call for a gender-equal world: a roadmap for action” here.