Mobilizing action for impact: The Women, Peace and Security and Humanitarian Action Compact

At a global virtual event co-hosted by UN Women, the Governments of France and Mexico, in collaboration with civil society, Board and Catalytic Members were announced as part of the new Generation Equality Compact on Women, Peace and Security and Humanitarian Action.

As part of the Generation Equality Forum, and in commemoration of  the 25th anniversary of the Beijing Declaration and Platform for Action and the 20th anniversary of UN Security Council resolution 1325 (2000) on women, peace and security, a virtual high-level event held on 27 October, announced Board and Catalytic Members of the new Compact on Women, Peace and Security and Humanitarian Action. The upcoming Generation Equality Forum is a civil society-centred, multi-stakeholder, global gathering for gender equality and women’s rights, convened by UN Women and co-hosted by the Governments of Mexico and France, in partnership with civil society. 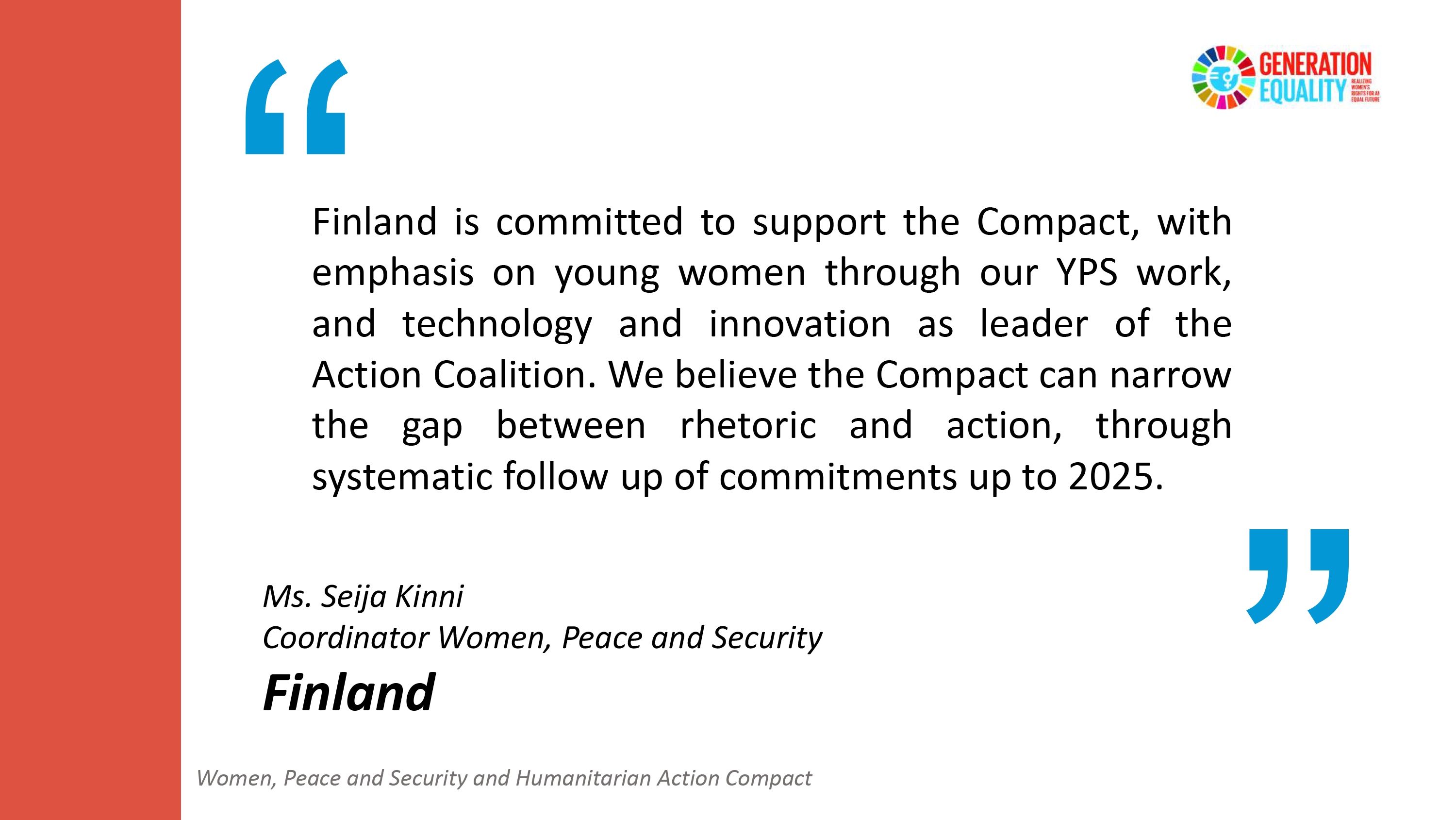 The Board and Catalytic members announced at the event represent a diverse group of stakeholders that will mobilize an inter-generational, inclusive global movement for action on women, peace and security and humanitarian action. Board Members are expected to lead the design and implementation of the Compact, with support from Catalytic Members. 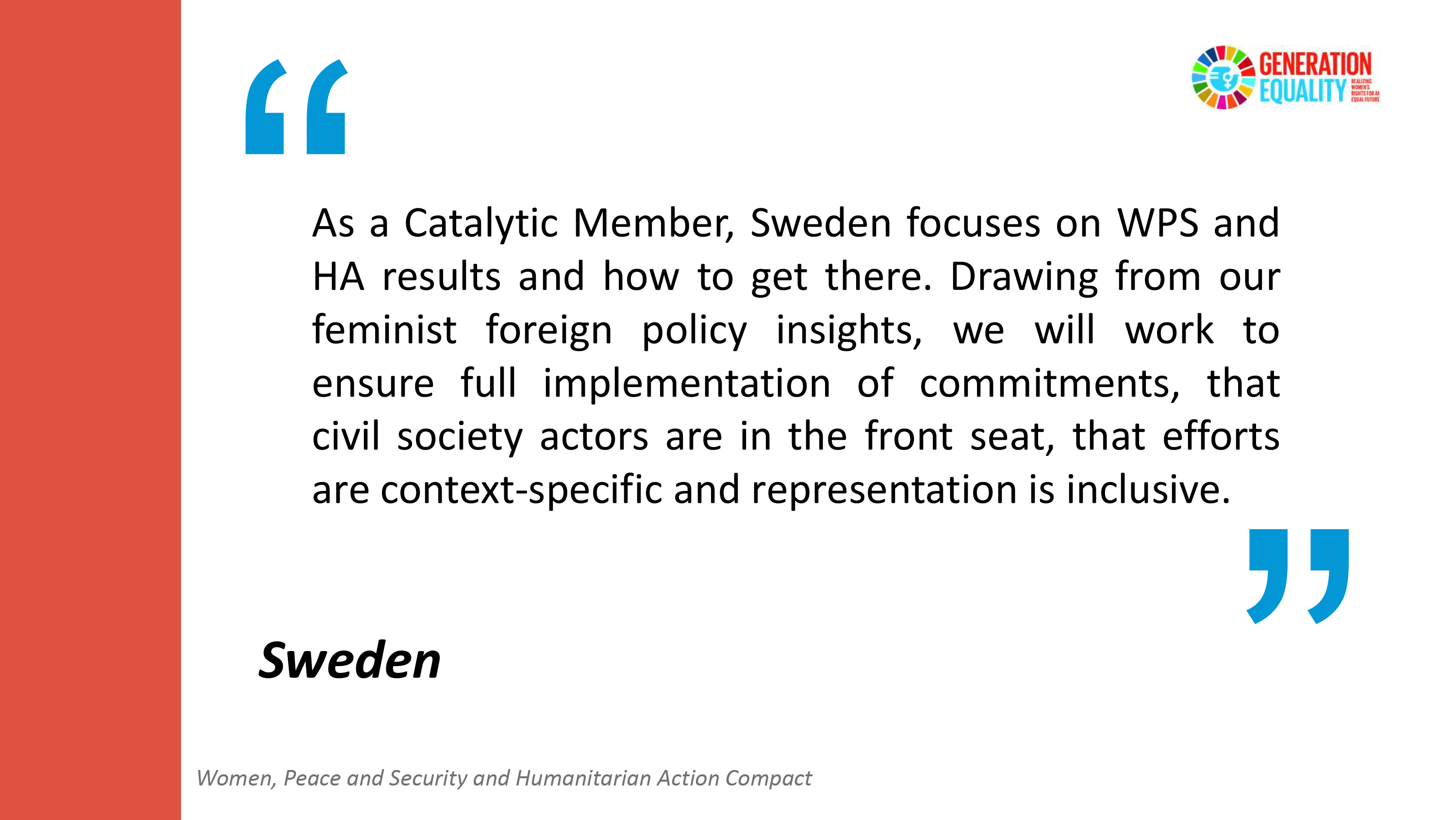 Opening the event, moderator Sarah Hendriks, Director of the Policy, Programme and Intergovernmental Division at UN Women, highlighted that, “the Compact is intended as a collective, inclusive and inter-generational effort to take stock of existing commitments on women, peace and security and humanitarian action and drive momentum for action and implementation of these commitments, while leveraging existing coordination mechanisms.”

Ms. Amani Aruri, representing the Generation Equality Forum Youth Task Force,   underlined that the current state of affairs doesn’t call for a celebration, but rather “an alarming reminder to all duty bearers and stakeholders that not enough has been done to ensure peace and security [...], to ensure power is transferred to put women at the heart of peacebuilding processes [...] and to ensure protection of women peacebuilders, especially young women.”

UN Women’s Executive Director, Phumzile Mlambo-Ngcuka expressed her hope that “the Compact will accelerate the momentum of goals and commitments that promote accountability and leadership at all levels”, to move the needle on the Women, Peace and Security agenda.

Ms. Martha Delgado, Undersecretary for Multilateral Affairs and Human Rights of the Mexican Ministry of Foreign Affairs, asserted that “the Compact should contribute to the mobilization of resources, cooperation and accountability” to reduce the gaps between the aspirations and concrete actions on women, peace and security and humanitarian action.

Delphine O, Ambassador and General Secretary of the Generation Equality Forum of the French Ministry of Europe and Foreign Affairs, called attention to the linkages with the Action Coalitions, explaining that Compact is “similar in spirit and goals but different in shape,” with the objective of creating “a platform that will itself create synergies that will catalyze commitments [...] to give new momentum to the women, peace and security agenda that we know is under attack.”

Manty Tarawalli, Minister of Gender and Children's Affairs of Sierra Leone, expressed that the creation of the Compact is “a move in the right direction”, since “it provides a holistic agenda for the WPS agenda and the humanitarian component. It will galvanize transformative action by all relevant actors for full implementation. It provides inter-generational dialogue that will create a sense of national ownership.”

Mavic Cabrera Balleza, Founder and CEO of the Global Network of Women Peacebuilders, shared her commitment that “the Compact will be founded in human rights and feminist principles, as such it will be bold […] in changing political cultures that will actively lead to reducing military spending and, instead, investing more in women and youth peacebuilders.”

Odd-Inge Kvalheim, Norway's Deputy Permanent Representative to the UN, stressed that the Compact is about “turning commitments into practical results for those affected by conflict”. As Norway takes its seat in the UN Security Council and on the Board of the Compact, Kvalheim noted that ensuring “Women, Peace and Security becomes operational in such a way that is felt at the country level” will remain a top priority. Hibaaq Osman, Founder and CEO of Karama, noting the importance of localization, underlined that the Compact needs to “reach beyond generations and nations” in order to succeed.

Pravina Makan-Lakha, WPS Advisor at the African Center for the Constructive Resolution of Disputes, noted the importance of the Compact in the context of the COVID-19 pandemic, which has exposed vulnerabilities and exacerbated the potential for conflict. 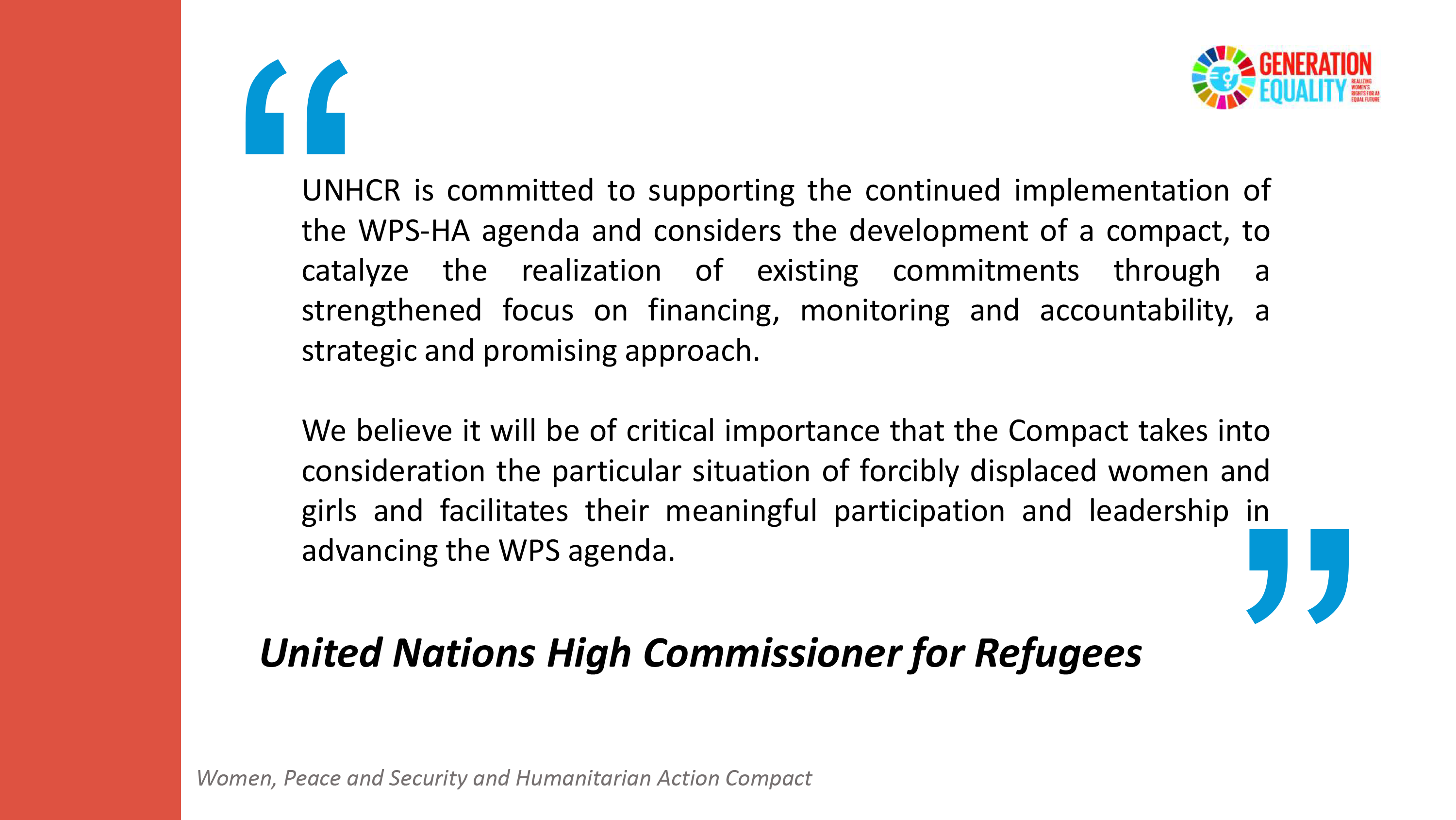 In a video statement, Sharon Bhagwan-Rolls, representative of the Generation Equality Civil Society Advisory Group, recognized the critical need to address the peace and humanitarian nexus. She noted that the Compact “is a reminder of our collective commitment to be accountable to women and girls for whom the Beijing Platform for Action, UNSCR 1325 and commitments such as the World Humanitarian Summit Grand Bargain are more than words on paper.”

In a joint statement, Mimidoo Achakpa and Anusanthee Pillay underlined the commitment of the Feminist Humanitarian Network to ensure that the Compact  “include women’s rights organizations and women on the frontlines of humanitarian action” and that humanitarian action is “fully integrated in all efforts to promote women’s leadership, secure active participation and promote the full protection of women’s rights.”

Reflecting on the importance of amplifying concerted action, Ghasaq Shaheen, Deputy Permanent Representative of the United Arab Emirates to the United Nations, expressed that the Compact will not only offer a platform for more comprehensive monitoring and accountability but to better organize among existing mechanisms.

Paivi Kannisto,  Chief of Peace, Security and Humanitarian Action at UN Women, introduced the Catalytic Members, underlining their demonstrated commitment to the women, peace and security agenda and humanitarian actions.

In closing, Netumbo Nandi-Ndaitwah, Deputy Prime Minister and Minister of International Relations and Cooperation of the Republic of Namibia, expressed that “the Compact can breathe some fresh air into the WPS agenda, including by engaging Member States that have not always prioritized the agenda.” 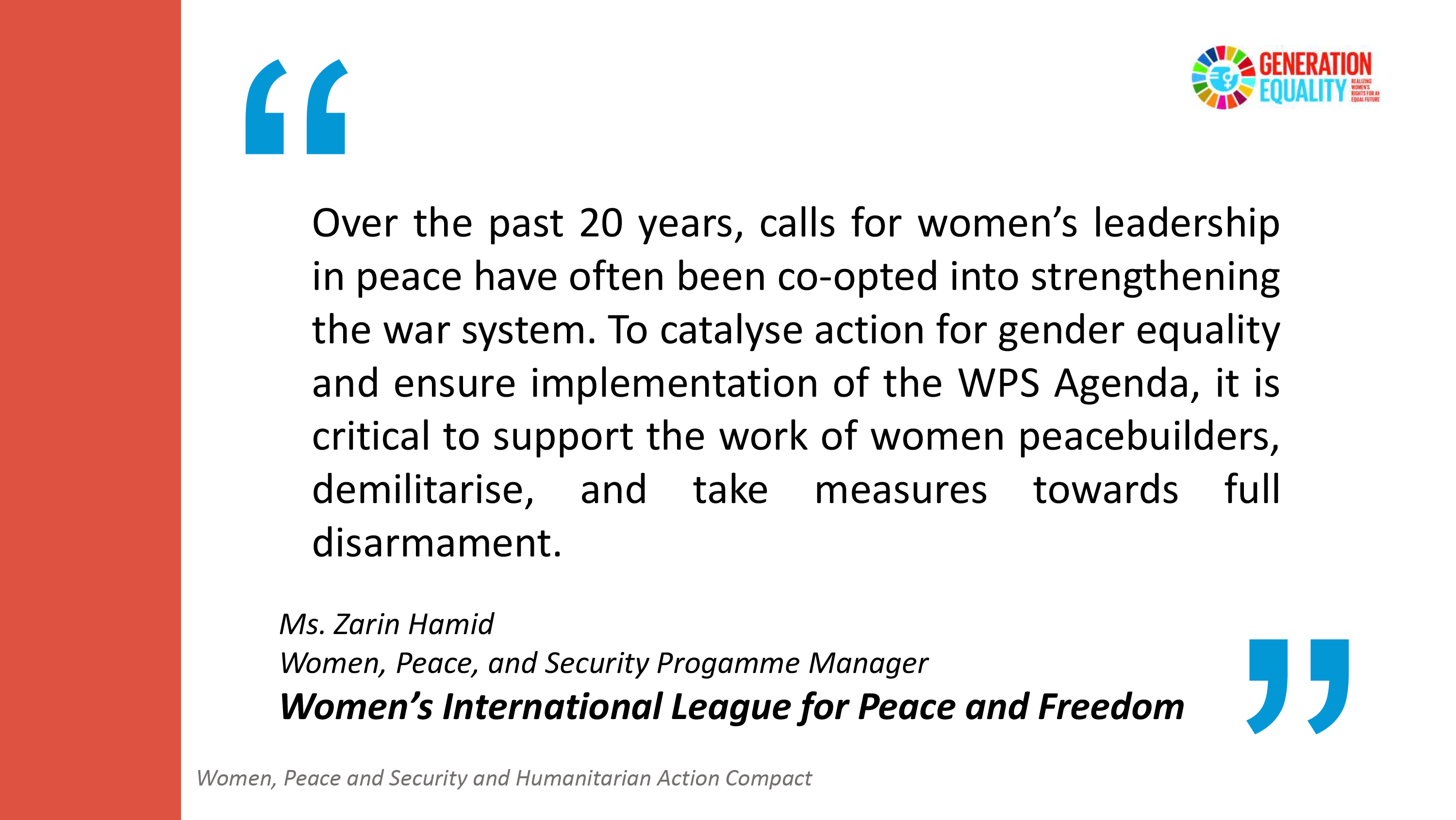 María Fernanda Espinosa Garcés, High-level Ecuadorian Gender Equality Advocate and Generation Equality Multi-Stakeholder Steering Committee Member, reflected that “the best way to make the case for the critical role of women in building peaceful, sustainable and resilient societies is to walk the talk.”

The Generation Equality Forum in Mexico will host the first meeting of the Compact Board and Catalytic Members in March 2021. The Compact will be officially launched at the Paris Forum in June 2021.