The mural recognizes 2021’s landmark Generation Equality Forum and is a partnership of UN Women, Street Art for Mankind, the City of New York and the Governments of France and Mexico, with support from BNP Paribas. 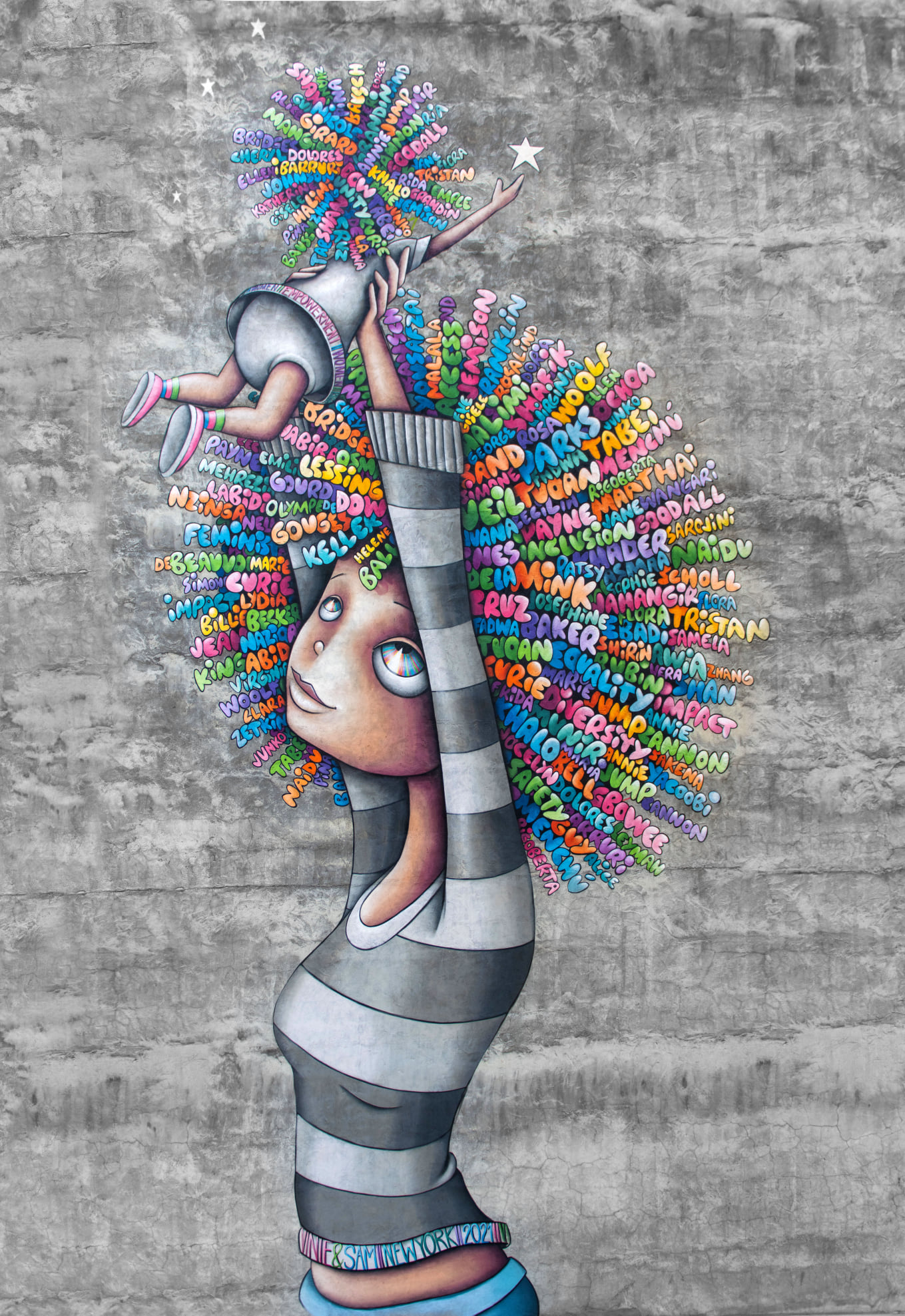 1 October 2021, New York – A global collaboration of artists and partners today unveiled the third in a sequence of murals to celebrate global action for gender equality, marking the efforts of the 2021 Generation Equality Forum, which has galvanized over USD 40 billion in commitments to advance women’s and girls’ rights. The mural, located at 200 East 44th street in New York, aims to inspire every generation to accelerate action and progress towards gender equality. The unveiling of the mural will be a closing highlight of the 2021 UN General Assembly (UNGA), acting as a symbol of United Nations leaders’ commitment to gender equality. It has been produced as a partnership of UN Women, Street Art for Mankind (SAM), the City of New York and the Governments of France and Mexico, with support from BNP Paribas.

Street Art for Mankind partnered with the UN Women in conjunction with the Generation Equality Forum, a civil society-centred, multi-stakeholder global gathering for gender equality, convened by UN Women and co-hosted by the governments of Mexico and France in 2021, to create a series of three murals around the world with prominent women street artists. The first mural was created by Adry del Rocio in Mexico during the Mexico Forum in March, the second was created by Lula Goce in Paris during the Paris Forum in June. The New York mural is the third in the trilogy and was created by artist Vinie Graffiti.

The 100-feet high “Generation Equality” mural, created two blocks away from the United Nations, reflects on the importance of intergenerational efforts to advance gender equality and pays tribute to over 50 women activists who paved the way for a more equal world. It is hoped that the mural will serve as a focal point to inspire and engage the public for years to come.

A free mobile app called “Behind the Wall®”, published by SAM, enables the public to scan the mural to hear the story, learn about the artist and take action directly in front of the wall or from anywhere in the world.

Welcoming the launch of the mural, Lopa Banerjee, Executive Coordinator of the Generation Equality Forum, said, “This powerful mural is a testament to the power of imagination and activism in the journey towards full global gender equality. The Generation Equality Forum this year in Mexico and in Paris has shown us how high and how far we can all stretch towards gender equality when we work with purpose and creativity across sectors and global boundaries. This powerful mural brings that vision to life and encourages us all to ‘reach for the stars’ as we imagine a better and more equal world”.

Audrey Decker and Thibault Decker, Co-founders of Street Art for Mankind said, “It is a true pleasure to be back in New York, and to launch the third mural close in this inspiring trilogy in our hometown. It has been an incredible adventure during a pandemic, from Mexico to Paris then New York, meeting with passionate women activists, working with talented women street artists… We are also very excited to bring the bubbly and colorful style of Vinie for the first time to the US. We hope that this positive mural and tribute will become a place where women come to join forces and fight for their rights. In fact, this whole journey was such an inspiration for us that we decided to continue the adventure by adding more Generation Equality murals across the US and the world in order to rally even more people to the cause!”

The mural was made possible thanks to the City of New York, to Alchemy-ABR Investment Partners and Clarion Partners who donated their wall for the occasion, and to BentallGreenOak who facilitated access to the plaza. It was made possible due to the generous support of BNP Paribas.

“BNP Paribas is proud to support this powerful initiative. This partnership brings together governments, artists, and organizations dedicated to advancing the rights of women and girls. This third, and final, mural in the trilogy embodies the importance of a global commitment to gender equality, a commitment firmly echoed by our organization,” said Ilias Catsaros, Head of Brand and Communications Americas at BNP Paribas.

The unveiling ceremony included a music performance by Masha Brodskaya, a Grammy-recognized singer and Founder of the Global Creative Initiative.

The New York mural will be inaugurated on Friday, 1 October at 4 p.m. in front of the wall at 200 East 44th Street, New York, 10017 in the presence of UN officials, sponsors, Street Art for Mankind and the artist.

2. Please see below for additional quotes for media use:

Artist: “I am honored and humbled to be able to use my art to raise awareness on such an important cause. Being a woman, working as a street artist, doing a very physical work can still be very surprising to many and at times very challenging. So, I hope that my story and my art will inspire millions of girls across the world to try hard and live their passion and dream. My piece is a tribute to all the grandmothers, mothers and daughters around the world fighting to make this world more equal.” - Artist Vinie Graffiti

Mission of France: “This mural will be a living testament of the Generation Equality Forum. After Mexico and Paris, it is only fitting that New York becomes itself a feminist capital.” - Ambassador Nicolas de Rivière, Permanent Representative of France to the United Nations

Mission of Mexico: “The Generation Equality Murals series in Mexico City, Paris and New York mark in a colorful, graphic and artistic way our commitments to achieve gender equality and the empowerment of all women and girls within the next five years” - Ambassador Alicia Buenrostro Massieu, Deputy Permanent Representative of Mexico to the United Nations.

3. Mural photographs are available at https://www.dropbox.com/sh/ziug8hiqajb8iv6/AAD6UgiItFrDis78JuJc6L9Pa?dl=0
These images may be used in media articles with credit to @streeartmankind.

4. Further information including maps and artist bios are available at https://streetartmankind.org/generationequality/.

5. Street Art for Mankind (SAM) is a French-American, 501(c)(3), non-profit organization working with prominent street artists from all around the world to raise awareness on SDGs and child trafficking through the power of Art. The New York Generation Equality Mural is the third of the 2021 #GenerationEqualityMurals series.

6. The Generation Equality Forum took place in Mexico City in March 2021 and in Paris from 30 June – 2 July 2021. The Forum launched a five-year action journey to achieve irreversible progress towards gender equality, founded on a series of concrete, ambitious and transformative actions, including USD 40 billion in financial commitments. Read more about the outcomes of the Paris Forum here.