Invest in Generation Equality to drive gender equality and the Sustainable Development Goals urge global leaders at a High-Level Political Forum side event on 15 July. 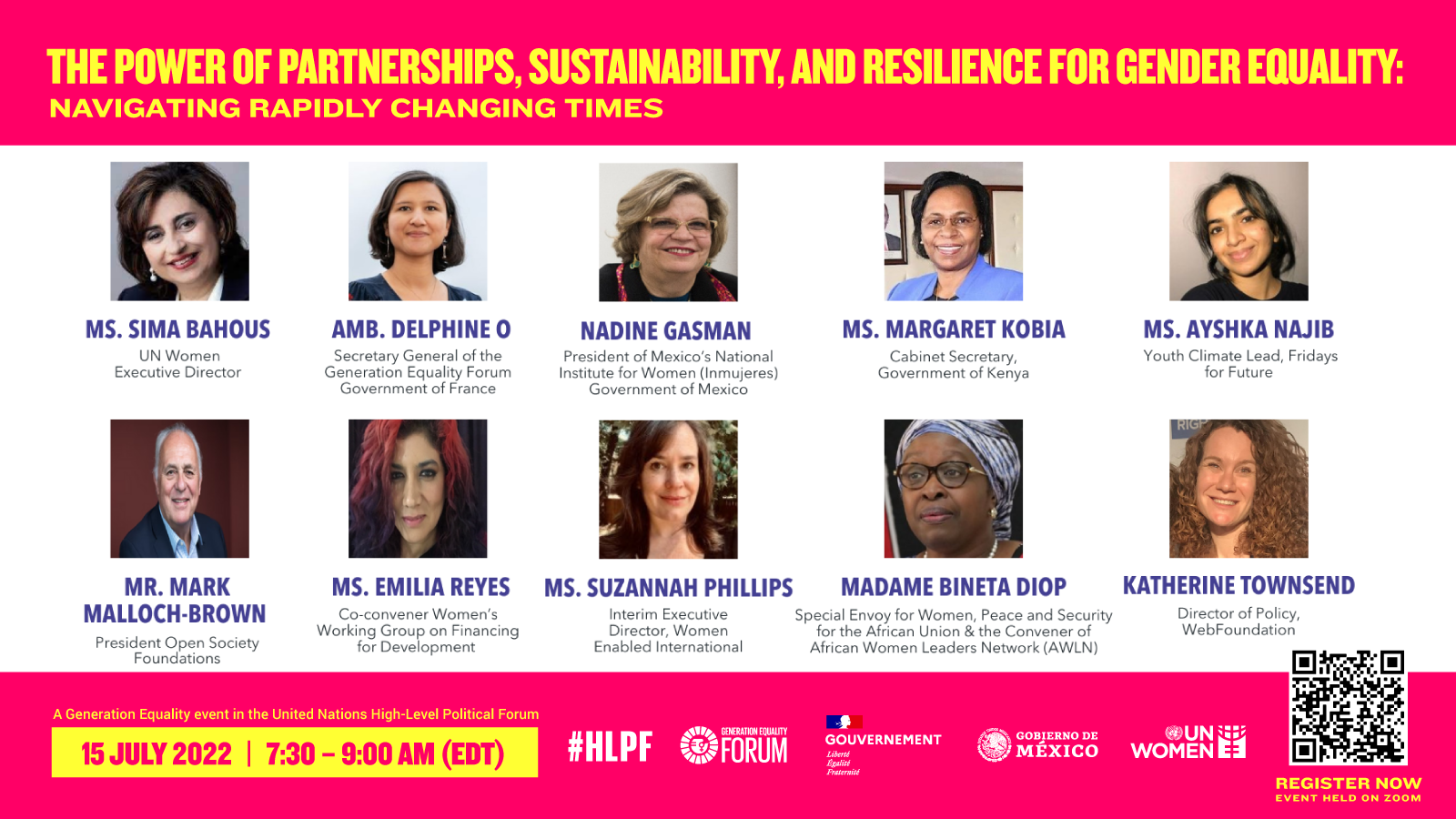 The high-level roundtable, convened by UN Women and co-hosted by the Governments of France and Mexico, brought together global leaders from diverse sectors and regions to explore how the innovative model of Generation Equality can be further strengthened as a key vehicle of action and investment towards achieving gender equality and the United Nations’ 2030 Sustainable Development Agenda.

“Generation Equality is the world´s leading initiative to unlock large-scale and inclusive collaboration and investment for gender equality. Underpinned by the Beijing Platform for Action, it is demonstrating the promise of building back equal towards a more inclusive and sustainable world,” said UN Women Executive Director, Sima Bahous. “We now need to focus on the implementation and accountability of these commitments, while calling on new partners to step up.”

The global leaders from Generation Equality’s Action Coalitions and the Compact on Women, Peace and Security and Humanitarian Action advocated for evidence-based solutions with women and girls at the center to ensure the world builds back better and equal from the COVID-19 pandemic.

UN Women’s latest report on the SDGs reveals that globally, out of 18 indicators for SDG 5, only one indicator is close to target: the proportion of seats held by women in local government. The current bleak outlook on the distance remaining to achieve SDG 5 on gender equality demands from us to tap fully into the potential of Generation Equality.

From commitments to action

Several speakers spoke about the specific commitments they are currently spearheading to accelerate gender equality and build back better post COVID:

“A major focus of the work that we've been doing since the Generation Equality Forum is to empower women and girls in all their diversities in regional, national and local climate groups to take action, providing them with visibility on all our media platforms and supporting educational programs focusing on grassroot communities,” said Ayshka Najib, Youth Climate Lead in Fridays for Future Most Affected Peoples and Areas.

The need to work locally along beneficiaries to empower women and girls was also exemplified by the representative of the Government of Kenya, co-leader of the Action Coalition for Gender-Based Violence and a country that submitted 12 commitments at the Forum.

“The Generation Equality Forum [has] brought focus to our work with local and international partners, [helping us] think through how we can bring women-led and youth-led organizations together, and to really focus on gender-based violence as Kenya co-leads this Action Coalition”, said Margaret Kobia, Cabinet Secretary of the Government of Kenya.

The power of partnerships

This year’s High-Level Political Forum coincides with the one-year anniversary of the Generation Equality Forum. Following the Forum’s inauguration in Mexico City in March 2021, multi-stakeholder commitments, including over USD 40 Billion in financing, were launched in Paris in July 2021 in support of the Global Acceleration Plan for Gender Equality.

Those multi-stakeholder commitments demonstrate how Generation Equality can be a force multiplier. Inclusive, intergenerational, multistakeholder partnerships alongside large-scale investments, such as those fostered by Generation Equality, can offer the push the world needs to reverse the negative trend and achieve the SDGs.

Mark Malloch-Brown, President of the Open Society Foundation, spoke about the Foundation’s USD 100 million pledge at the Forum and its work in Brazil and Argentina to ensure women’s voices are central to the design of solutions. “We are innovating and piloting approaches which both support those providing care and make the care economy more resilient,” he said.

Nadine Gasman, President of the National Institute of Women of Mexico spoke to the power of partnership as she was shedding light on the Global Alliance for Care, launched by the Government of Mexico jointly with UN Women to ensure the recognition, reduction and redistribution of care and domestic work. She referred to it as an example of a Collective Commitment made by a range of partners from different sectors.

It echoed across the panel that achieving gender equality requires leveraging the power of global partnerships and taking an all of society approach. “All partners are considered key partners in our efforts towards achieving the 2030 Agenda” reiterated France’s Ambassador for Generation Equality, Delphine O.

Generation Equality is an example of the importance of SDG17 towards accelerating progress on SDG5 and all of the SDGs. UN Women, as the convener of the initiative, called on partners to focus on the implementation and accountability of these commitments, while encouraging new partners to step up to collective deliver on the ambitious promise made to women and girls in all their diversity through the 2030 Agenda.

Generation Equality brings together multiple stakeholders who have made more than 2,000 commitments through six thematic Action Coalitions and over 160 signatories to the global Compact on Women, Peace and Security and Humanitarian Action (WPS-HA). Explore the commitments here: https://commitments.generationequality.org/dashboard/directory/