As part of the journey leading up to the Generation Equality Forum (GEF) in Mexico City and Paris in 2021, UN Women is hosting the Curated Discussions, a series of multi-stakeholder, multi-generational gatherings to foster dialogue among gender advocates from around the world. The Curated Discussions will provide insights on and address topics of relevance that will inform the GEF, including tangible recommendations for the design of GEF events and programming, as well as sharing of best practices to foster movement building for gender equality.

The first session, held virtually in late September 2020, focused on Multilayered Inclusion and Intersectionality and featured eminent feminist scholars and civil society activists. Among them, activist Mozn Hassan from Egypt and academic and legal scholar Alda Facio from Costa Rica share their reflections and recommendations on the path towards equality and justice. 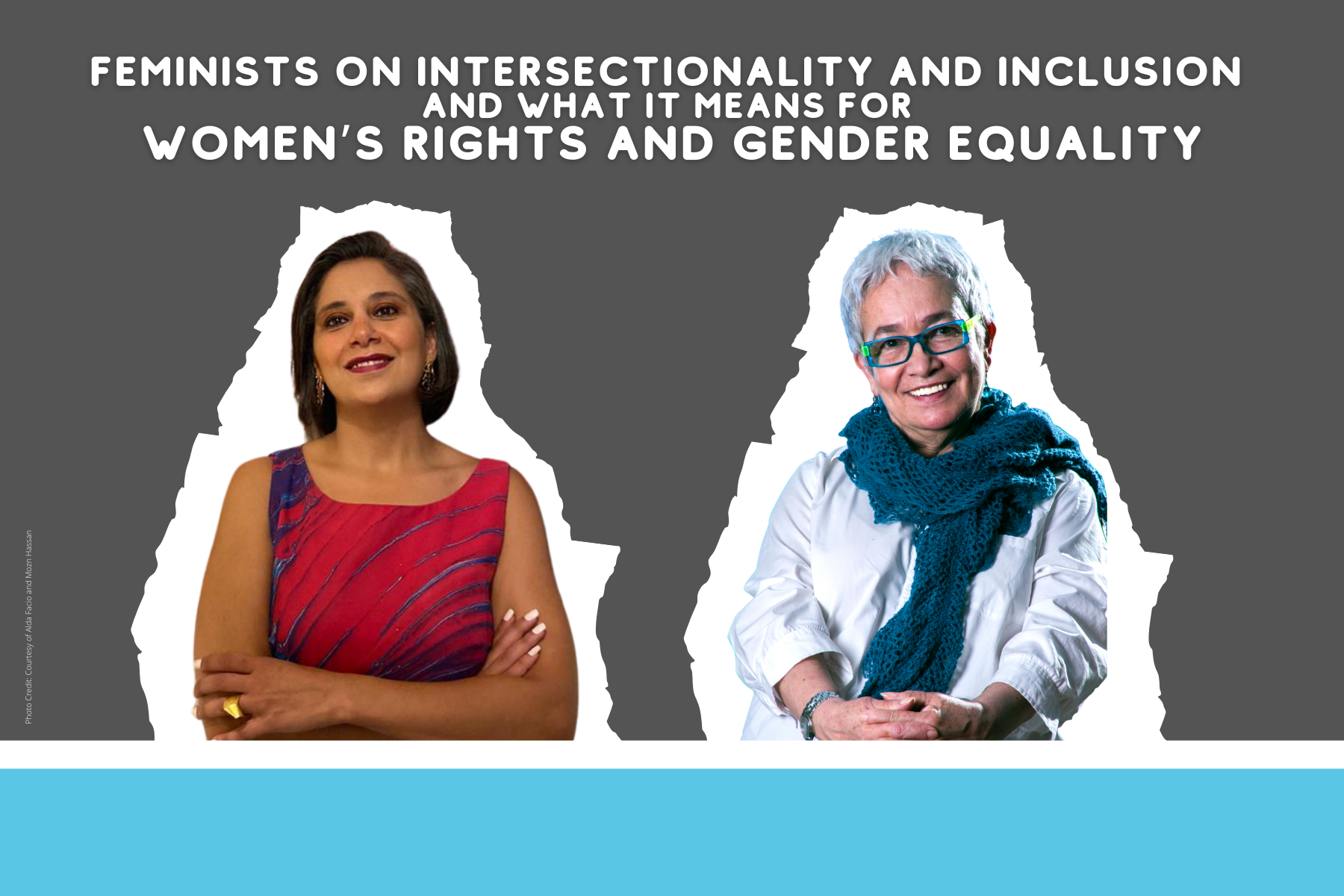 What does inclusion and intersectionality mean for you in the context that you work in?

Mozn Hassan: There are multiple feminisms that exist in the movement and this is where intersectionality comes alive. They each bring different perspectives that need to be taken into consideration since there’s a push back on women’s rights in different parts of the world; each perspective can give us clues on how to counter this push back. This is why we need to strengthen collaborations between local and international communities – to look for alternative solutions to problems.

Alda Facio: There are commonalities of discrimination and violence against women which transcend the boundaries of race, color, creed, nationality, class, and culture, but there are also enormous differences. Without including all women of all ages and conditions in our thinking, we will never eliminate all the structural and individual discriminations that women around the world suffer. These intersecting forms of discrimination reinforce each other and must be dealt with simultaneously.

Why is inclusion and intersectionality so critical to achieving gender equality?

Mozn Hassan: Policy makers need to divert from stereotypes and actually engage with us — not simply as interlocutors but as knowledge producers, narrators of our situations and creators of our policies. They need to centre stage our voices and make connections between our movement and their role. We need to look at the type of gender inequalities we are facing today, for example what the trans community is facing, and devise specific intersectional approaches to be included in the gender mainstreaming — including within the UN system —this includes how feminists are pushing to add human rights abuses, sexuality, sexual harassment and violence as issues in mainstream feminism.

Alda Facio: Discrimination is not only an individual problem but a social one requiring comprehensive responses beyond the individual woman. Intersectional discrimination and the vastly different structural barriers that diverse women face must be understood and included in our agendas for equality. The problem is not in women’s bodies nor in their diverse identities but in the many barriers society has built to impede women’s full participation in their own societies.

Where do the challenges lie, when it comes to being inclusive and intersectional in feminist work? What needs to change?

Mozn Hassan: We need to create open and safe spaces for diverse discussion in order to create a narrative that is truly inclusive rather than taking a ‘checklist approach’. There also lies a responsibility of the international community to create a direct and transparent structure and ensure that the flow of resources are inclusive of and guided by local communities.

Alda Facio: Even feminists hold opposing views on many issues. So, how do we express our concerns in a way that includes everyone? With respect to intersectionality, the challenge is how to recognize our commonalities as undervalued women despite the different intersectional discriminations we endure so that together we can conform a powerful women’s movement with the capacity to create a just and better society.

If you could share one takeaway from the Curated Discussion focusing on Multilayered Inclusion and Intersectionality to share with the world, what would it be?

Mozn Hassan: Stakeholders need to be having this conversation and engaging together for a more inclusive and intersectional environment for the feminist movement. Resources are not just about money, we need to invest in the movement by creating more spaces to mobilize, seeking and providing funding and quickly responding to emergencies.

Alda Facio: What I would like to share and echo is what a fellow participant mentioned about hoping that “intersectionality” not become just another buzz word. That is my biggest fear!

How do you think the Curated Discussions should feed into the Generation Equality Forum process?

Mozn Hassan: The GEF could engage stakeholders in an attempt to discuss and review how resources are being allocated in different regions like the MENA. Moreover, having more structural discussions, like the one we had, but between groups and people at a regional level. Finally, keeping and maintaining the funding for feminist movements so that each group can produce their own knowledge and solutions while creating structural spaces for ideas, independence, and sustainability.

Alda Facio: I think there should be an effort to define what is meant by intersectionality and multilayered inclusivity, through sincere discussion. Yes, one way is to listen to the voices of women, especially those who have been silenced and marginalized but what if their voices are saying contradictory things? Again, this is what happened in Beijing with “gender” where the concept was never defined even though it appears more than 200 times in the Platform for Action.

What for you, would be one ideal outcome of the Generation Equality Forum?

Mozn Hassan: After 25 years of the Beijing Platform, the international community needs to support the local community in terms of letting them have their own narratives and movements. As feminists we need to also use this approach while dealing with the different feminisms of the movement.

Alda Facio: That we could all come out with an agreement on what “gender equality” requires from everybody. It is time that we look also within ourselves to recognize how we contribute to so much discrimination and violence against all women of all ages.

What keeps me up at night….

Mozn Hassan: …is the passion I have for my work and how to constantly work on devising new tools to continue building and strengthening these multi-feminisms that we’ve been talking about.

Alda Facio: … is the fact that women’s rights are being attacked on many fronts and many of our gains since Beijing are being lost. We are seeing the erasure of women as a sex class in many parts of the world and at the same time attacks by fundamentalist groups are becoming more and more normalized so much so that many women do not really know what gender means for them or even what equality is.

What gives me hope…

Mozn Hassan: The constant emergence of new groups in the movement and how they are shedding light on different struggles of sexuality and gender which strengthens the fight of combating sexual violence against women.

Alda Facio: That so many young women are becoming feminist and doing great creative work to stop the violence and discrimination against us.

Mozn Hassan, 42, is the Founder and Executive Director of Nazra for Feminist Studies and a Middle East and North Africa (MENA) feminist activist passionate about movement building and combating sexual violence. She is based in Cairo, Egypt.

Alda Facio, 72, is one of five members of the UN Working Group on Discrimination against Women and Girls from the Latin-America & Caribbean region (WGDAWG) as well as advisor to several feminist NGOs in different parts of the world, including Jass and WHRI. She is based in Costa Rica.