Held in the context of the 77th Session of the UN General Assembly, the event brought together a vibrant group of multi-stakeholder partners to review and track initial implementation of the commitments made across the six Action Coalitions and Compact on Women, Peace and Security and Humanitarian Action launched at the 2021 Generation Equality Forum in Mexico and France.

Whilst momentum has remained strong throughout the first year of Generation Equality implementation – with commitments more than doubling from 1,000 to more than 2,500 – speakers emphasized that more must be done to ensure sustained action and investment.

“My call to all of you today is that you double down,” urged UN Women Executive Director, Ms. Sima Bahous, opening the event. “Double down on your accountability and reporting, double down on what you can do to energize resources, particularly towards the work of civil society and youth. And double down to make a meaningful and lasting impact.” 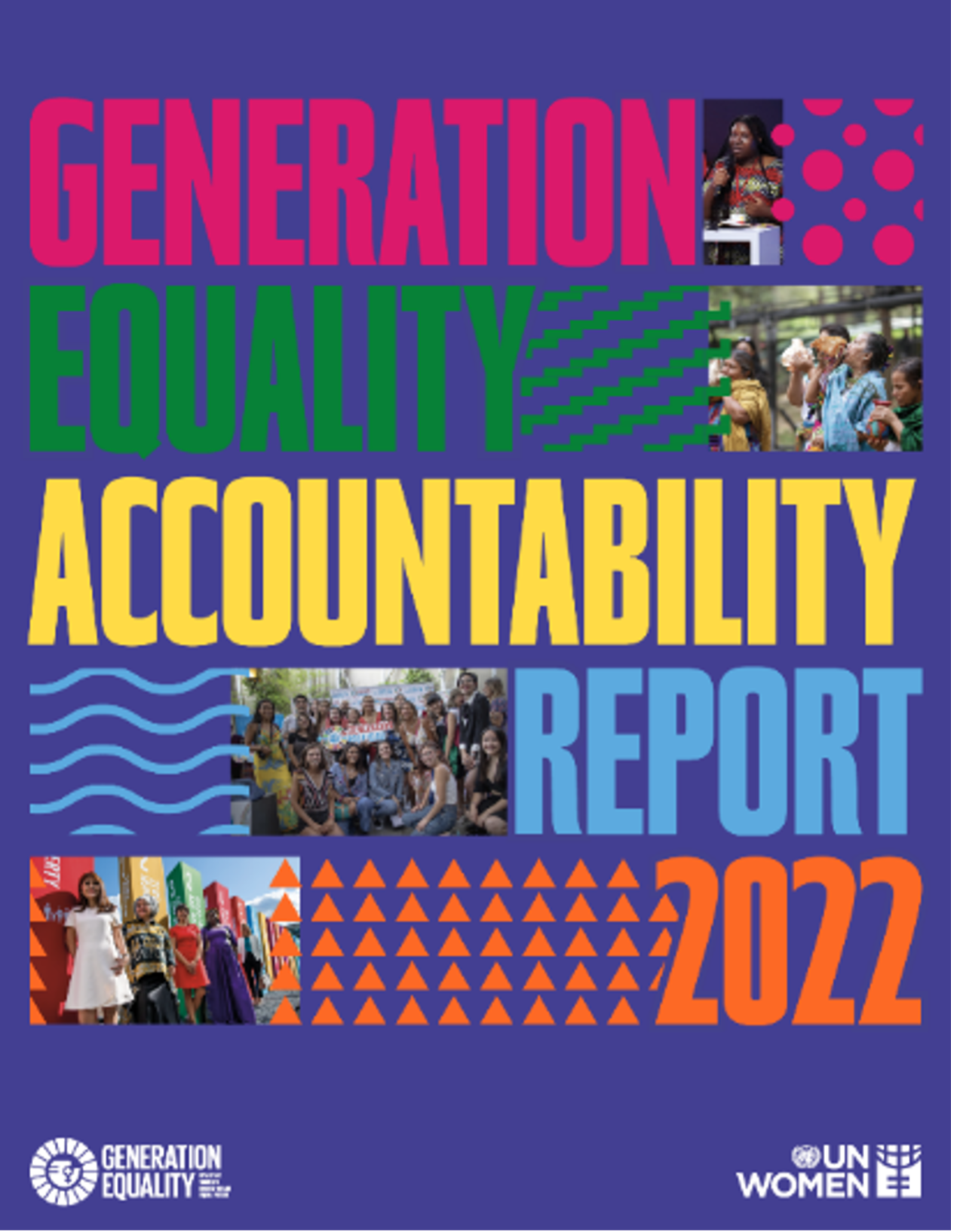 Ms. Bahous’s call for an intensification of efforts was accompanied by the launch of the first annual Accountability Report, kick-starting Generation Equality’s formal accountability journey.

The report reveals positive initial indications of progress, with close to 80 per cent of Commitment Makers who reported already working on implementing their pledges. However, the Accountability process is in its early phases and requires strengthening. Approximately 31 per cent of Commitment Makers have reported on their progress to date with the survey remaining open through October to gain further respondents. Participants joined forces in calling on all Commitment Makers to step up efforts on reporting and transparent sharing of impact and progress.

To achieve lasting change and deep accountability, “feminist movements and youth must be placed in the driver’s seat,” explained Emilia Blancarte Jaber, Global Advocacy and Accountability Lead at Global Fund for Women, and Rosa Bransky, Co-Founder and Co-CEO of Purposeful. Together, these two organizations are leading complementary accountability processes elevating grassroots feminist movements and youth to help ensure actors deliver on their commitments.

These voices “remain the backbone of gender justice today... And that’s why through this initiative we are facilitating an intersectional, transformative, inclusive and transparent accountability process that is entirely co-created and led by feminist movements and grassroots organizations from the Global South,” said Jaber.

Efforts on accountability will be further advanced by the newly launched online Accountability Platform, which complements the Commitments Dashboard in facilitating transparency on commitments and tracking and illustrating progress towards Accountability Framework targets.

Accelerating towards the Sustainable Development Goals

“It [Generation Equality] is an approach that mirrors the Secretary-General’s vision in Our Common Agenda. Actors from every sector working together to advance a more equal society, bringing energy, dynamism, new ideas, new resources, and a powerful spirit of collaboration with youth and civil society at the centre: a display of strengthened multilateralism in action for the 2030 agenda. That bold, new spirit is what makes the promise of Generation Equality so great. It is our moment to re-energize collective action and momentum for gender equality,” said UN Deputy-Secretary General, Amina Mohammed.

In this vein, a Multi-Stakeholder Leadership Group comprised of diverse stakeholders has been launched to advise UN Women on the forward Generation Equality agenda and ensure multi-stakeholder leadership remains embedded at the core of the initiative. View the first cohort of members here.

One year into Generation Equality implementation, participants from across sectors shared concrete reflections on their own progress and impact generated to date.

Adolescent advocate, Ishanvi Malayanil, showcased the advances achieved by the Generation Equality Adolescent Girls Steering Group. Ishanvi worked alongside 20 other adolescent girls to mobilize over 1,000 adolescents across 123 countries through activities such as global campaigning, awareness raising, intergenerational panels, girl mentorship, and media interviews. In doing so, they have successfully oriented adolescent girls’ priorities across the Action Coalitions and accelerated important conversations around adolescent girl leadership.

CEO of the Gates Foundation, Mark Suzman, shared a powerful case study demonstrating the catalytic potential of the partnerships being incubated in the Action Coalitions. The Gates Foundation made a USD10 million commitment to support the care economy through the Action Coalition on Economic Justice and Rights. Leveraging the Action Coalition partners and networks, the Foundation collaborated with a range of experienced advocates and governments such as Germany to help drive significant weight and political visibility. This in turn led to the Foundation’s committed funds combining with others to spur the creation of the first ever World Childcare Initiative with the World Bank, which is catalyzing USD180 million dollars in new funding to support childcare in low- and middle-income countries.

“That is the kind of action and transformative power of multiplying networked effects that we hope to achieve across all the areas that we work in,” said Suzman. The Gates Foundation has committed a total of USD2.1 billion to support Economic Justice and Rights, Sexual and Reproductive Health and Rights, and Feminist Movements and Leadership.

Leading onward to the 2023 Midpoint

A sense of optimism was palpable throughout the event, as the real-world impact of Generation Equality becomes increasingly clear. And with the midpoint of the Generation Equality journey to be reached in one year’s time, the initiative’s momentum and aspiration show no sign of diminishing.

The next Generation Equality Forum, to be held in New York in Fall 2023 at the midpoint of both the Generation Equality and Sustainable Development Goal journeys, offers a focal point for accelerated ambition and commitment. The Forum promises a key opportunity to further enhance accountability, expand traction and support across sectors, and announce transformative new commitments where they are needed most.

“In one year’s time, at the Generation Equality Forum in New York, I want us all to stand here together with pride, with evidence of success, with powerful stories of impact, with the vast majority of Commitment Makers fully reporting, and with the confidence, dynamism and collective power that comes from knowing that SDG 5, the Beijing Platform for Action, and our collective promises are in our sights and in our grasp,” said Ms. Bahous, sharing her aspirations for the year ahead. “Together we have created an unprecedented opportunity. Let us reach forward together to realize that promise.”