This editorial series provides a glimpse into the work of the Generation Equality Action Coalition Leaders as they work to develop catalytic actions and commitments to advance gender equality. 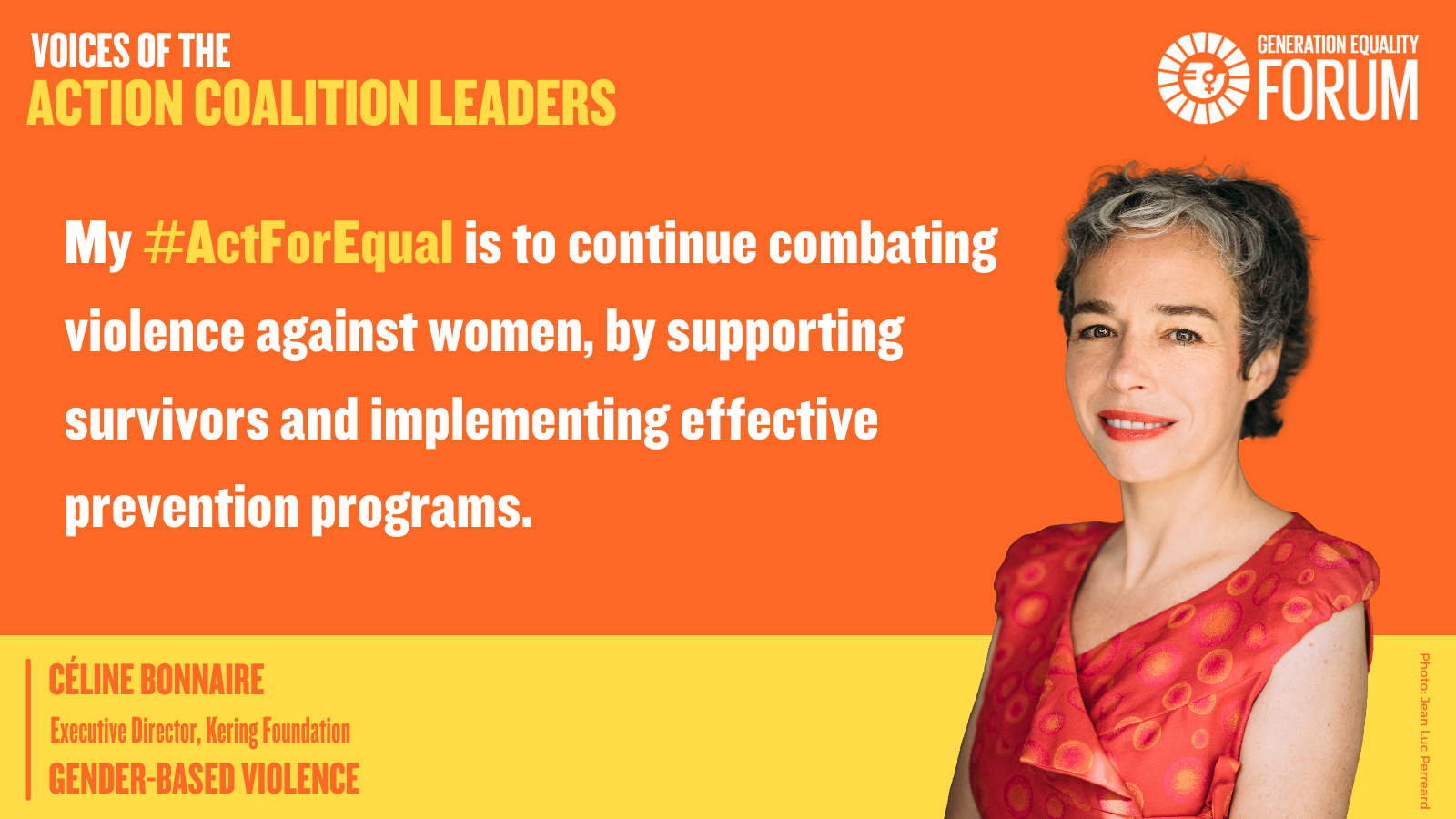 Why did your organization sign up to play a leadership role in the Action Coalition on Gender-Based Violence?

In 2008, Chairman and CEO of Kering, François-Henri Pinault, founded the Kering Foundation to end violence against women. He wanted the Group to focus on a cause where it could make a real difference and we have been focused on this for the past 13 years, with key feminist partnerships at the center of our strategy.

Our ambition is to share our experience, share our network, scale up our work and mobilize a broader group of companies to join us in combatting gender-based violence. We firmly believe that everyone has a role to play in putting an end to violence against women, and that is why one of the key streams of work that we focus on at the Kering Foundation is around bringing other actors on board to take collective action. One key example is the One In Three Women, the first European network of companies engaged against gender-based violence, which we co-founded in 2018 with the Fondation FACE, to share best practices and co-develop tools. This is the same multi-stakeholder cooperation approach that the Action Coalitions are based on, meaning that becoming a leader was a natural step.

The regular and inclusive conversations we have among the leaders of our Action Coalition are about breaking silos, listening to each other’s views and taking a long-term perspective. From these discussions it has become clear that the organizations combatting violence against women are all facing the same challenges, including backlash and a lack of funding, and capacity. This recognition has led us to some very concrete ambitions. We have defined clear objectives, targets, indicators and will define commitments to tackle these barriers and I am confident that we will make effective and transformative change, using an intersectional lens, for women and girls in all their diversity.

What for you is an ideal outcome of the Generation Equality Forum?

An important outcome is to succeed in securing sets of concrete commitments for gender equality from diverse participants. We have this great leadership group for each Action Coalition, but it is time for new commitment makers to join the initiative and help make change happen. It is especially vital that we get more companies involved and signing up to take steps to put an end to gender-based violence. After this Forum, everyone should understand how they can become an agent of change and promote gender equality and the elimination of gender-based violence at all levels, from the personal and family level up to the institutional and societal level as well. I hope that each participant will come away from the Forum knowing what change they could implement the next day to help achieve gender equality.

What change is most urgently needed in the sphere of Gender-Based Violence, and what action will make a catalytic difference in realizing this?

I think the most urgent needs are highlighted through the four main actions that we have designed together in our Action Coalition. These actions consider the need to have more states ratifying international and regional conventions, as well as more actors in the public and private sector adopting action plans to end gender-based violence. We also prioritise implementing and financing evidence-driven prevention strategies, particularly those that work with the younger generation to put an end to intergenerational cycles of violence and engage men and boys in the conversation.

Transforming funding is another urgent need that we highlight. While everyone agrees that women’s rights organizations need to receive better funding, when you have a look at where the money goes, women and girl-lead organizations are receiving just 7% of the global philanthropic funding. That’s why we are focusing on increasing the amount of quality, flexible funding from states, private sector and other donors to girl-led and women’s organizations, as well as the broader need to scale-up and improve financing of coordinated survivor centred services.

What motivates you personally to keep driving for change?

I have two answers, the first is from a professional standpoint. Since day one I have been constantly amazed by the resilience and the strength of women survivors. I keep on doing this work because I think that supporting these women moves us in the right direction and because I want a future where there are no more women that have to be survivors of violence. The second answer is that in my personal life I have two children, a boy and a girl. I am raising them as feminists but can clearly see how harmful stereotypes start early and how difficult it is when the gender equitable messages they receive at home are countered by the messages that they receive at school, in television programs, video games and so on. It’s very challenging to try and keep the balance and I want to see these gender norms shifted.